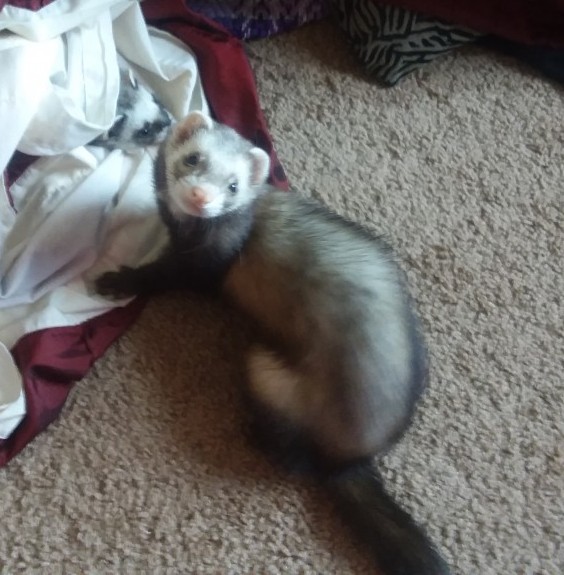 I think that ferrets are the perfect pets. But every once in a while, I have to stop and ask myself if they’re really as perfect as I think they are. Are ferrets good pets, or do I just love them so much I overlook everything wrong with them? Before I can recommend ferrets to other people, I have to stop and ask myself, exactly why do ferrets make good pets? Here are my four reasons.

1. Something to Come Home to

Your typical caged pets – rabbits, hamsters, chinchillas, etc. – are great. I’ve had several in my life. But they’re not really something to come home to. Not the way that cats and dogs are, anyway. They have this instinct to run away when you try to catch them, and they just can’t get over that instinct, no matter how much they really might like you.

In contrast, dogs run to the door when you get home. Cats – well, it depends on the cat.

The point is, I wanted a companion animal, something that would keep me company, and wanted me around.

Ferrets do that. My ferrets crawl out of their hiding places when they hear the apartment door open, and wait by their own door until I open it. They run out to play with me when I wake up. In fact, they recognize my alarm when it goes off in the morning, and instantly come out to say good morning. It’s not a one-sided relationship where I chase them around their cage for three minutes before I can get them out to pet them. When I do chase them, it’s because we’re playing a game.

Ferrets have a reputation for being mean, aggressive, and vicious. The reputation might come from ferrets who were mistreated and turned vicious. Or it might come from the fact that, like all predators, ferrets use play as a rehearsal for hunting – so their play looks vicious to us, even though it’s really not.

But what are ferrets really like, beneath the reputation, and the rough play?

My ferrets are the friendliest, funniest, most affectionate pets I’ve ever owned. It’s hysterical to watch them run around, poking their noses into everything, figuring out how to climb things, push drawers open from the inside, hop around like madmen, and tunnel under rugs. They sometimes even slither. Yeah, slither. Their playfulness is infectious.

Ferrets are very entertaining animals. More importantly, though, they are friendly and easy going. They’re eager to greet new people and go new places. Like cats and dogs, they are capable of making emotional connections with their owners. They show genuine affection for each other, and for their humans. And they really, truly, want you around.

3. Smaller than Dogs and Cats

So far, all the reasons I’ve given for why ferrets make good pets also apply to cats and dogs. This is because cats, dogs, and ferrets are all companion animals – animals domesticated to live in close relationship with humans, as partners.

I’m not going to tell you that ferrets are better than cats of dogs. They’re not. It’s a matter of personal preference, and which animals you personally connect with. To be honest, I’m not entirely sure why I prefer ferrets to cats and dogs. If I had to guess, I think it’s something about their playfulness, their exuberant personalities, and that I really just like the way they look.

But ferrets do have a size advantage over cats and dogs. Compared to cats, and most dogs, ferrets are quite small. They also live in cages and are happy to live in cages as long as they’re allowed several hours outside the cage each day. You don’t have to take them outside, or for walks, like you do with dogs. You can litter train them like cats.

This makes them good apartment pets, especially when apartments have rules or extra fees for cats and dogs. Obviously, if you’re looking for a pet to guard your home – well a ferret’s not going to do that. But if you want a pet for companionship, ferrets are perfect. If space is an issue, or you want an animal you can easily control by just sticking it back inside its cage, ferrets are perfect.

Birds also make great pets. Cocktails and Parrots can also be companion animals. The disadvantage of birds, of course, is that they’re very messy, and very loud.

Most dogs are also quite loud.

Now, ferrets can make a bit of noise, when they’re playing, or clawing at their cage, or chasing each other across your bedroom at 2AM while you’re trying to sleep. But usually, they’re quiet animals. And they certainly do not make the kind 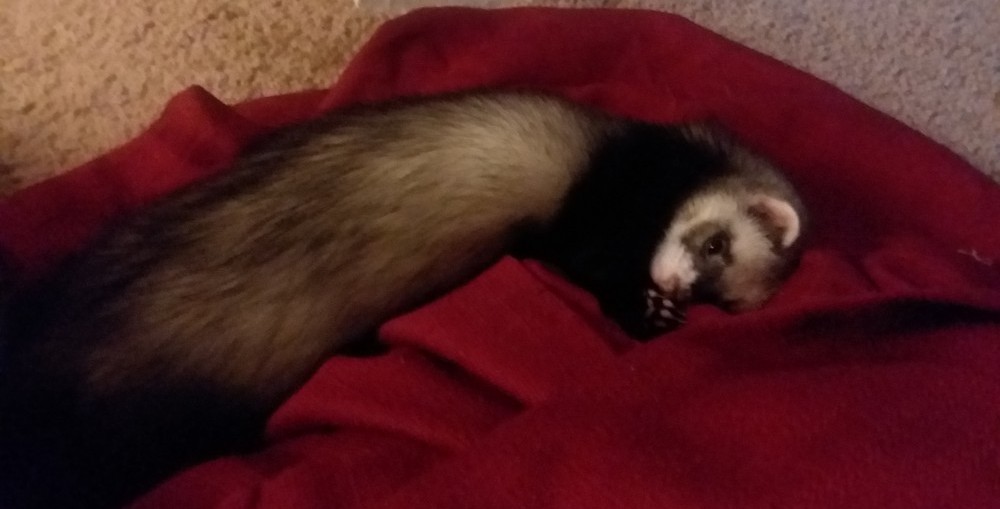 of noise that will cause your neighbors to complain.

They also sleep up to eighteen hours a day. When they’re awake they’re crazy bundles of energy, but most of the time, they’re not awake. When you need them to calm down, usually all you have to do is put them in their cage, and they’ll go right to sleep. (Disclaimer: That only works, of course, if they’re allowed enough time outside their cage to play each day.)

So, why do ferrets make good pets?

Ferrets might not be the perfect pets for everyone, but they are for me. They’re the right size for my apartment, and quiet enough to not get me in trouble with my neighbors. But above all, they are affectionate, entertaining companions who keep me company and give me something to come home to at night.

For more detailed pros (and cons) of owning a ferret, click here.

What about you? Ever owned ferrets, or considered it? Why do you think they make good pets . . . or not good pets? Share your stories in the comment section below!

6 thoughts on “Why Do Ferrets Make Good Pets? | 4 Reasons”